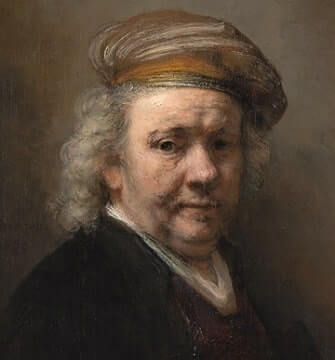 Rembrandt van Rijn is considered as one of the greatest painters and printmakers in European art and the most important in Dutch history. His works came to dominate what has since been named the Dutch Golden Age. One of the most revered artists of all time, Rembrandt's greatest creative triumphs are seen in his portraits of his contemporaries, illustrations of biblical scenes and self-portraits as well as his innovative etchings and use of shadow and light. Along with Vermeer, Rembrandt is considered as two most important artists of Dutch Golden Age.

His father, who was a miller by profession, made sure that his son attended school. However, at Leiden University, he did not complete school. Instead, he apprenticed to a painter for three years. Later on, the young artist moved to Amsterdam, a growing center of commerce at the time. He apprenticed to an artist in Amsterdam, who helped him grow his talent greatly.

The first artist was a specialist in depicting fire. This had a great influence on Rembrandt, who was renowned as a master in depicting light. He helped Rembrandt learn the ropes on painting, teaching him all the basics of art. The second artist, who he apprenticed with, was also crucial to Rembrandt's career. He taught the young budding master how to depict historical scenes on canvas. This was crucial, as he later became renowned for his paintings on historical scenes.

After apprenticing for the skillful artist in Amsterdam, Rembrandt returned to Leiden, now a master. He became renown for depicting small, yet detail rich paintings. In addition, he began to tear apart the work of his masters and recreate it in his own style. This was a style that was later carried own by some of the pupils who apprenticed with him. In addition, while in Leiden, he began to work on etchings. His fame and fortune would come from the widespread distribution of these works.

The artist became renowned for his masterful Manipulation of light. Essentially, he would create illuminated pockets surrounded by darker areas. Consequently, on first observing the painting, they would land first on the clusters of light. Eventually, they would begin exploring the rest of the painting. One of the most famous paintings from this era is 'Peter and Paul Disputing'.

Although he was twenty-two years at the time, he managed to attract many willing students. He took on a lot of them, some of who went on to become masters in their own right. The records have been lost to time and it is not possible to estimate how many skillful artists trained under him.

Despite his artistic success, it was not until 1631, that he really began to make it financially. He moved to Amsterdam where he entered into an agreement with an entrepreneur. The businessperson had specialized in selling paintings, restorations, making copies among other activities concerned with paintings.

One of the reasons Rembrandt may have settled to work in the entrepreneur's workshop, were the rules governing master painters at the time. The rules stipulated that one had to give a notice, at least two years prior. After that, one might be considered for admission to a special click known as the guild. Consequently, admission to the guild would mean that they were allowed to engage in the sale of their work.

Rembrandt continued to work in the entrepreneur's shop for four years. He only gained admission to the guild of Amsterdam in 1634. Later on, he married a niece to the owner of the workshop where he worked. During his time working in the workshop, he managed to produce many single and group portraits. His masterfulness in light manipulation, and the experience of historical paintings, helped him edge out the rest of the painters. Most commended his skillful portrayal of human skin.

During his time with Uylenburgh, the owner of the workshop, Rembrandt also became renowned for his historical paintings. Most of them had a religious theme. His many religiously themed paintings have always risen speculation as to his religious leanings. However, since his parents wee not of the same religious sect, it has been speculated he chose to remain neutral. At the time, there was a lot of antagonism between the sects. In addition, the animosity between Jews and Christians was at an all-time high in Dutch. However, Rembrandt remained sympathetic about Jews during his time. A Rabbi who had come to be a close of friend of his during his time in Amsterdam may have influenced his views.

In 1635, Rembrandt finally left the workshop and established himself as an independent painter. He lived in some rentals in Amsterdam and finally bought a mansion of his own. Most estimate that the year 1640 was the height of this skillful master's fame. In fact, most considered him the greatest painter of his century. During this time, there was growing interest in art. Most people, who identified themselves as lovers of art, would visit studios and proceed to stare at a painting for hours, while commenting on how it made them feel.

This period is thought to have begun in 1642. This is especially because there were few paintings by the artist. It is speculated that his style may have become too boring; as a result, he was unable to find work. However, others speculate that after his Night Watch painting he began to do a deep self-reflection. AS a result, he might have felt that his style had reached his zenith. In addition, surviving documents indicates he was involved in many domestic and legal tussles. The few works, which he managed to put out, indicate a radical change in his style. Essentially, it is speculated that the reason for the low output is both artistic and family turmoil.

During this period, Rembrandt sort to protect himself from his creditors and therefore avoid bankruptcy. Therefore, he placed himself in the service of his son. However, the reason for this perceived hard financial times might have been due to the Anglo-Dutch war. The blockade enforced on Dutch ports cut off essential capital flows into the country, thus reducing the market for luxury goods such as paintings.

This was his most famous paintings. Dated to the year 1642, it was life size, about twelve feet long. He tried to liven up the work by depicting each person doing something different. This was as opposed to the trend then where everyone assumed the same posture. This also marked the end of the major success he had enjoyed.

This famous painting depicts an anatomy lesson in detail. This was the second anatomy lesson had given in Amsterdam. It was painted during the winter, when the stench of a dead body was not overpowering. It was commissioned in 1632.

This is one of the master's most famous masterpieces. It acquired its name in the nineteenth century. It is classified as a historical painting; depicting an instance from biblical records. However, no one is sure what it stands for. In addition, the period during which it was painted is unclear, thought to be 1665.

Return of the Prodigal Son

The painting is one of Rembrandt's most famous historical paintings. It depicts a solemn scene of a beat down son returning to his father's welcoming. In essence, it can be interpreted as depicted human kind's sinful nature and God's unending love for humanity. In addition, the artist's mastery of light depiction can be seen in the painting. The figure of father and son stands out from all other figures in the painting.

This is yet another masterful depiction of a historical scene by Rembrandt. In the painting, created in 1633, he was known to make paintings seem livelier. The scene shows Jesus in a boat with a group of twelve men, all desperately trying to save their lives. It may also be portrayal of man's powerlessness over. Something most Dutch would have been familiar with; a huge chunk of the country was reclaimed from the sea.

The painting depicts a nude woman, the mythical Greek figure, Dane. In the painting, she is welcoming Zeus to her bed, with whom they sire Perseus. The artists demonstrate a masterful use of light depiction. Originally, he used his wife but later changed the face of Dane to that of his mistress.

Rembrandt inspired numerous seventeenth-century Dutch and German painters, as well as eighteenth-century artists throughout Europe, and a broad range of nineteenth-century realists. Nowadays, Rembrandt is usually regarded as the greatest artist of Holland's, other than Vincent van Gogh.

The Return of the Prodigal Son